Doodle Pool was an underwhelming take on cue sports. Though its graphics were astounding, the game somewhat underachieved in every other category. Now, Icon Games, as we all know, creates Minis that are inexhaustible by nature. Arcade Air Hockey & Bowling, Bashi Blocks (formerly Soccer Bashi), Family Games and even the weak Arcade Darts all have extended lifespans. Arcade Air Hockey & Bowling and Arcade Darts are the most comparable to Arcade Pool & Snooker. They have the same user interface, the same format and the same profile system. Arcade Air Hockey & Bowling, ironically, has no Arcade Mode. Arcade Pool & Snooker, though, includes one. Arcade Darts misfired a lot in the gameplay department, especially in its suspicious controls. Meanwhile, Arcade Pool & Snooker has smooth controls. It is highly recommended to practice first before going into battle with the A.I. It takes time to familiarize oneself with the controls. You can press and hold X to take the shot, but before that, you can adjust the spin with O. You set the power with the up and down keys before releasing your grip on the X button to hit the cue ball. The shoulder buttons are for zooming the view of the table in and out. The analog nub could also help with the angles, directions and power of your shot. In general situations, the directional buttons are better in that department, though. Arcade Pool & Snooker offers several variants of cue games. In the snooker family, it has 6-ball, 10-ball, 15-ball, as well as the eponymous snooker. In the pool family, 9-ball, 8-ball (US and UK versions), 6-ball, 10-ball and 15-ball are included. There is also the generic billiards. I opt not to explain the rules of each variant because, obviously, this post would not be enough. One blemish in Arcade Air Hockey & Bowling was its uneven A.I. The distance between the skills of the lowest A.I. and the mid-level A.I. was enormous. In Arcade Pool & Snooker, the A.I.s are unforgiving. As soon as you enter the World Tour, you are matched with players that show no mercy. A.I.s do struggle sometimes but they won’t bail you out in easy go-ahead shots. The Arcade Mode offers a tamer world, since you are matched with low level A.I.s, and its difficulty increases as you jump into subsequent levels. There is also an Exhibition Mode which offers two options: Single Game and Tournament. In Tournament, you can choose the location of the game, the number of players participating (4 minimum participants, 32 maximum!!!), whether it is a knockout format or a league-type, what game variant, match length and the level of A.I. The World Tour is the most enjoyable part of the game. You earn trophies, climb the rankings and win things. You can further customize your equipment with the prizes you win along the way. There’s multiplayer, but I certainly recommend playing the real thing instead. I can’t find any joy in playing multiplayer games on the PSP in which you take turns with a single PSP. The graphics boast 3D models, but they’re not awe-inspiring. I can say “above average.” Same goes for the soundtrack. You can turn off Player Models and Crowd Models since they don’t offer anything except cosmetics. You can also turn off Aiming Aids and Prompts if you want to challenge yourself more. This game is not fast-paced, and there are also loading times, but they are not really long enough to be a turn-off. These loading times are apparent throughout Icon Games’ Arcade series of Minis, not because of the games’ lack of optimization but more due to the abundance of content (I guess). Indeed, Arcade Pool & Snooker, like Arcade Air Hockey & Bowling, is a Mini that offers you a lot of bang for the buck. 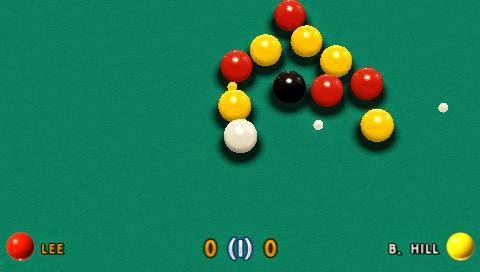 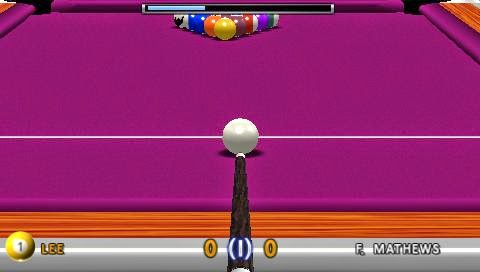