Archibald’s Adventure is the first game to be released on the PSP by the Czech Republic developers Rake in Grass, with previous success on the PC and iPhone with games such as Jets ‘n’ Guns and Undercroft the Prague based development company hope to have equal success on the PSP. Archibald’s Adventure is a 2D puzzle platform game with over 180 levels set out over 12 chapters. You play as Archibald who while skateboarding with his friend’s in the junkyard of Professor Klumpfus mansion ends up falling down a pipe and into sector 215 of the professor’s lab. Unfortunately for Archie all of the professor’s genetically modified creatures have escaped and are on the loss and to make matters worse the professor’s supercomputer has sealed off the whole house leaving it up to Archie to manually reset the computer and save the day. The object of Archibald’s Adventure is to navigate your way through the maze of levels all the way to the exit door using what ever gadgets and gizmo’s to help aid you on your quest. The first chapter in the game is almost a tutorial with you being introduced to different things that can help or harm our hero through out the game. At the beginning you start with just your skateboard but later you gain access to new and wonderful gadgets from a sticky bubble that can pick up creates and flip switches to maintenance machine that can stick to metal surfaces, break through boxes and even drive up walls and across ceilings. While gradually being introduced to each new gadget through out the game, rake in grass have used this as a way to introduce new puzzles and ways to play each stage. Rake in grass have also been very clever with the way the have set out the controls, with rather then having many different buttons doing multiple things they have simplified things. For instance rather then have a jump button while using the skateboard or maintenance ball you are able to automatically jump gaps as long as you have 3 or more spaces for running room, which also adds an even greater challenge and puzzle to the game. If you do find that a level is to challenging or you get stuck you can simply skip to a different level as you are not required to play through the levels in any particular order. I did find that a lot of the levels were quite small in size but the larger levels in the game would have a few checkpoints (in the form of respawning devices) dotted around the stage’s in case you fell pray to any of the professor’s creations which come in handy. Archibald’s Adventures graphics have a very nostalgic feel to it which are reminiscent of games from the early 90’s with games such as Boogerman: A pick and flick adventure and Earthworm Jim. The sounds aren’t to bad with a few different looping song’s that play in the background of each stage which you probably won’t be paying a whole lot of attention to in the first place due to being completely immersed in the puzzle of the game. If you are looking for a great puzzle game and with over 180 challenging levels across 12 different chapters Archibald’s Adventures is a game that should be in everybody’s game library. 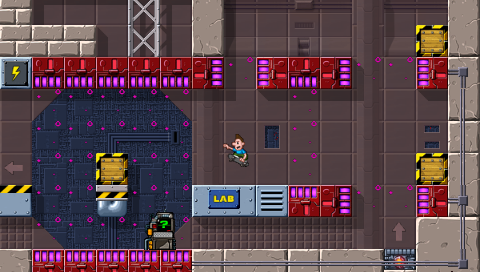 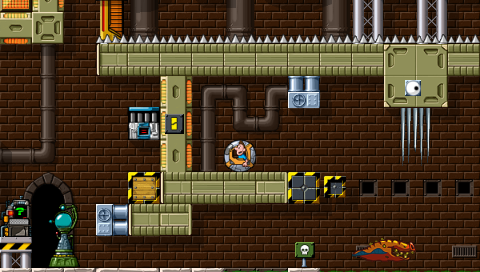