Bee Wars is one of those games that was announced (last summer, 2010), then sort of disappeared into limbo, completely forgotten by me until suddenly it appeared just last week. India-based Gameshastra was one of the earliest Minis developers. Then, they seemed to move away from them for a while (to iOS, naturally), but this is the second Mini they’ve released in the last month or so. At first glance, it appears to be a bee-themed, turn-based wargame. Indeed, it basically plays like one—you have a map divided up into hexes, and you move various types of units from place to place, capturing objects (flowers) and guarding your base (beehive), while the AI does the same. Not unlike the old classic wargames of computer gaming’s golden age. But, it also has some puzzle elements which can overshadow the wargame part, and you really need to discover how to beat a level by figuring out the trick to it. You have the basic Worker Bee that sucks the nectar from a flower. But you also have Thief Bees that will come up and steal honey from them or from the opposing beehive. To counter these, there are Police Bees, who lock up the bandit bee in jail and take the honey back. But what do you counter the Police Bees with? Ninja Bees, of course. The catch with Ninja Bees is they move slowly, only one hex at a time. Ninja Bees can also ward off the dreaded Bear and Farmer, who can attack your beehive. 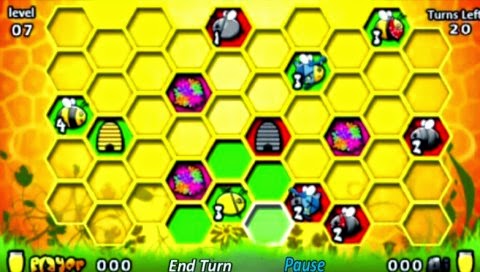 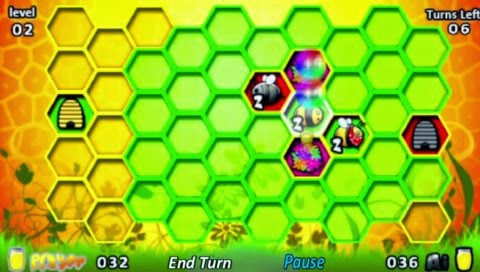