Burnin’ Rubber is the third Data East classic video arcade game to be turned into a Mini by G1M2. It’s far, far better known as “Bump ‘n’ Jump” which is the name it was called by in the West, and describes the game much better as well. Another way of describing it would be Spy Hunter, minus the guns, but with the ability to jump. That’s not exactly fair though, since this predates that game and was popular enough in its own right to be ported to a variety of old consoles. It’s a vertically scrolling driving game. You move your little car left or right and up and down as the terrain zips by, while accompanied on the road by a handful of other cars. In a twist on most driving games, hitting these other cars isn’t a bad thing. It’s actually part of the goal (and name) of the game, to bump into them and have them careen into the side of the road. Of course, the same thing can happen to you. So you have to watch out when you bump into them. There is about a half dozen types of other cars, some which are easily shoved out of the way, while others are not so easily moved. You also have to deal with the terrain. At first it’s a fairly simple road with the occasional bridge being out. You get a warning and you use your jump button to spring over the water (or try to make it to the part of the road that isn’t out). Sometimes you need to make more than one jump, so it can be tricky, you have to hope there is a place for you to land. You can also employ your jumping ability to squish the other cars on the road. This can be a little tricky because you still bounce off of them. And you need to know when to jump, to make sure you land back on the road, which can sometimes get quite narrow. As in their past efforts, G1M2 gives a variety of options. Stretch the screen, difficulty, number of lives, bonus lives, and if continues are allowed. The latter is nice because the game has 32 different tracks (or patterns it calls it). And you can save or load games, so you can take your time and experience them all at your own pace. Whatever you think about the games themselves, G1M2 has really done a great job in this regards. Like the other two Data East games, this one is probably more of a borderline classic than a true one. I think it’s more fun and holds up better than Lock N Chase, but on the other hand it lacks the variety of gameplay you had in Express Raider. Will most gamers today like it, almost 30 years after it first came out? In all honesty, probably not. But the people who do like it will still like it 30 years from now. 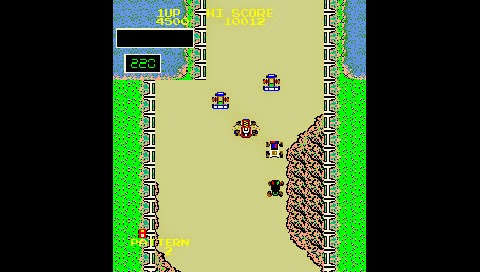 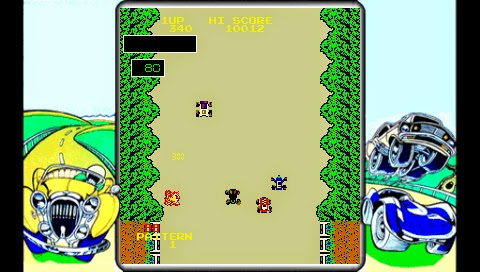