Victory Road is the sequel to the classic arcade game Ikari Warriors, which has already been released as a Mini a few months ago. The original Ikari Warriors was a vertically scrolling shooter (or run & gun) where you controlled a Rambo-esque figure navigating through a jungle full of enemies, trying to rescue a giant Teddy Roosevelt, the only bit of strangeness in an otherwise fairly conventional setting. The game is fairly simple to play. You move in four directions (using the D-pad or analog nub), can aim in eight (using two buttons to rotate through each direction), and fire your carried weapon or throw grenades in that direction by tapping buttons (X or O). Victory Road basically plays the same as Ikari Warriors, but the strangeness is present right from the start, not just at the end. The two characters from Ikari Warriors have been transported to a strange, otherworldly dimension, one that seems a lot like the settings of Mortal Kombat (which came several years later). They are confronted by what looks like the boss from the earlier arcade game Sinistar—basically a giant floating head that taunts them with digitized speech. Only instead of sounding like a robot, it sounds a lot like Robert Patrick (from Terminator 2, The X-Files, and his best work, Fire in the Sky). After delivering a challenge, enemies appear and you must fight your way through them, progressing forward, as always in these types of games. The playing field in the original Ikari Warriors was essentially a great long jungle battlefield, complete with fortifications, gun emplacements, tanks, and so forth. In Victory Road, though, the playing field is a desolate island in a void and is mostly just a lot of dull yellow, sort of like driving through Kansas, with all its cornfields. Sometimes the colors change, but the drabness always remains. The opponents are also quite different, reminding me a lot of 1000 Tiny Claws; mostly, you fight scorpions and spiders and the occasional ogre, while flying bats or harpies or something fly down at you. Most of these attacks come in formations or waves, like in other types of shooters but not usually found in run & gun games. These are all as drab as the terrain itself. Along the way, you can get power-ups. These basically are a flamethrower (which you start with, actually, then lose when you die) and a sword that I think protects you from enemies that run into it. I think that’s what it does. Ikari Warriors would let you get into a tank, while this has a suit of armor you can climb into. Essentially it protects you for a little while, like the tank did, but doesn’t give you a cannon to fire. 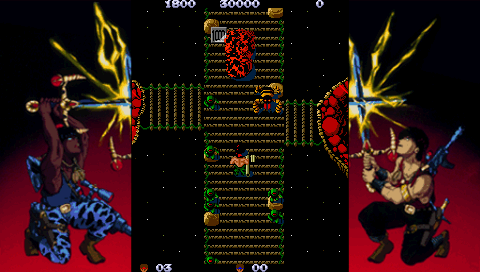 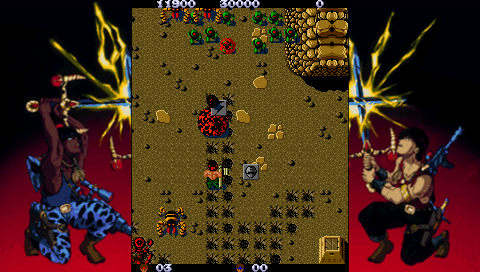 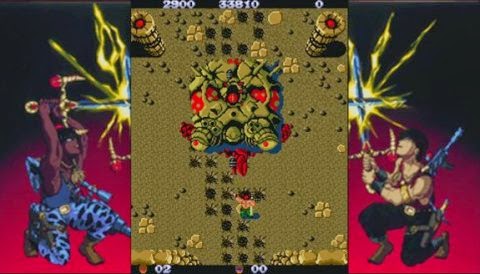