It looks like it’s time for SNK to reach into their vault of arcade classics and pluck another long forgotten relic for us to play again. This time, it is T.N.K. III that has been dusted down to hit the PlayStation Store’s virtual shelves. T.N.K. III is a top-down shoot ‘em-up that was first released as an arcade game back in 1985. The player takes command of a tank that has to make its way from point A all the way to point B whilst avoiding obstacles, enemy gunfire, missiles and even submarines. T.N.K. III lacks any sort of story, which in all fairness was fairly typical for most top-down shooters back in the ’80s. To manoeuvre your tank from point A to B, you can use either the analog stick or D-pad, both of which work just as well as the other, although I personally felt it was a little more comfortable using the D-pad. Of course, merely avoiding your enemies would be no fun at all, and that’s why your tank comes equipped with machine guns and a cannon that can fire in 8 directions. The shoulder buttons are used to rotate the cannon, and Square is to fire it. Like all the other SNK games that have been re-released as Minis, you can change the controls in the pause menu and have the option to save and load your game state whenever you please. As with the other releases from SNK, I did find it a little annoying that the Select button was used to pause the gameplay, and, unfortunately, this is one thing you cannot change in the option screen. As an added option, you are also able to choose whether you want to control the cannon yourself or have it “auto aim,” although it isn’t actually auto aim like it says; instead, the cannon fires in whatever direction you have the tank facing. 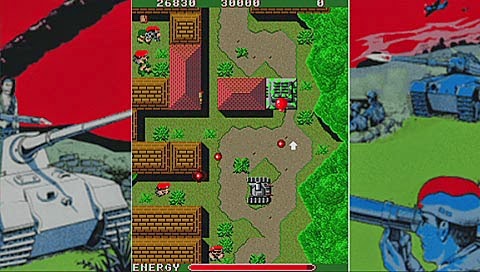 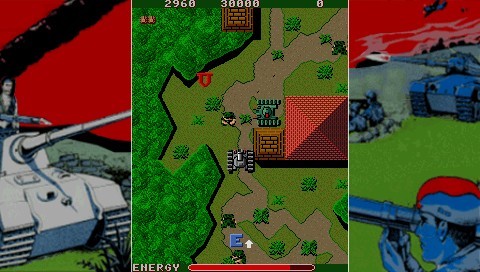