When Mighty Flip Champs! DX appeared out of nowhere as a listing by the ESRB, it was a surprise because the developer, WayForward, had mostly specialized in Nintendo platforms, and because the game on which it was based (just plain Mighty Flip Champs!) utilized both screens of the Nintendo DSi. How could they adapt the gameplay of the puzzle-platformer to only one screen? The answer is surprisingly simple—they merely took advantage of the wide aspect of the PSP screen and laid the playing fields side by side. It works so well you wouldn’t know it wasn’t a native PSP game. You control a young woman named Alta who is trapped in a 2D platform maze. To escape, she must make her way not to an exit, but to a fishman by the name of well, “Fishman.” Along the way, she sometimes needs to collect her friends, who are cats and other sorts of animals. There isn’t any backstory behind this, so it’s more than a little nonsensical, if vaguely allegorical. In any case, it’s impossible to reach him simply by maneuvering the young lady to him. There are obstacles in the way. But, Alta has the ability to change or flip through realities (or pages as they are called in-game), where things on the screen are different. So by flipping through the different versions of the maze, you can get Alta to her goal. The left side is where Alta currently is; the right side is the next page that she will flip to. The graphics on the right side are slightly distorted. Some stages have several different pages, so a good memory helps to figure your way out. And on some levels, it takes more than just figuring things out to beat. It takes some action skills as well. Sometimes you need to flip pages as she is falling. While it’s not that difficult, it is a little tricky, because if you flip while she is in the middle of a wall, she dies and you have to restart the level. Unfortunately, every time you restart, you have to go back to a loading screen for that level (which is not quick, either, almost 10 seconds, which I guess shows their inexperience with programming the PSP). On levels you are having trouble figuring out and in which you are dying a lot, that adds an extra bit of frustration. More than a few times, I got angry and turned it off because I was so close to finishing the level, but made a tiny mistake and then had to wait to try again. (Though to be fair, it’s the hottest part of the summer and my air conditioner is dying, so I am a bit irritable.) Further adding to the frustration is that there is no tutorial, or really any explanation of how the game works. Tutorials can get old if you have to do them more than once, but I’ve found them very helpful for puzzle-based games. There is a software manual included, which you can read from the XMB, but it’s a bit vague. While the basics are easy enough, some things are poorly explained, for instance the “Mark of Champions.” It’s a little square you can move around by holding down the right shoulder button and using the D-pad. But just what it does, or how you are supposed to use it, I don’t know…. There are apparently 5 worlds, each with a number of stages. You start off with only one stage and world unlocked, and then when you finish that, the next one unlocks, and so on. While this is fairly standard, this sort of progression annoys me because it’s all too easy to get stuck on a stage. It’s nicer when completing one unlocks 2 or more, giving you the ability to bypass one you can’t beat. When you finish a stage, though, besides unlocking the next, you get a letter grade based on how quickly you solved it. Alas, that ranking is really the only sort of score or achievement the game features. There is also the only one game mode, so the only sort of replayability it has is trying to beat the best time for each level. You do apparently get some sort of reward for finishing all the levels with S-ranks, but I couldn’t manage to do that, so I don’t know what it is. Well done 2D sprites can really be extremely charming, especially if they are well animated, and that is the case here. They are a little hard to see, as I guess they simply kept their native DSi resolution, which makes them look small on the bigger PSP screen. The music is equally enchanting. Mighty Flip Champs! DX delivers a fun and novel type of puzzle-platformer. At the same time, though, it’s rather a no-frills experience for a high price tag, and the somewhat lengthy time it can take to restart a level can prove frustrating, as can getting stuck on a level. 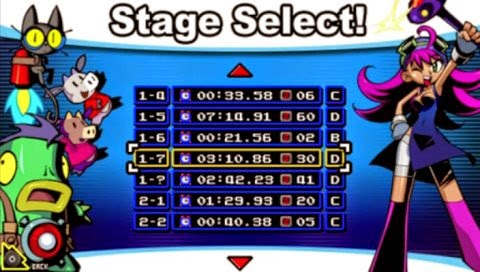 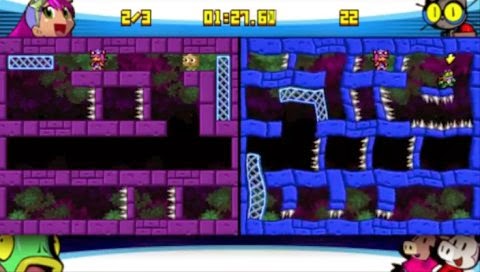 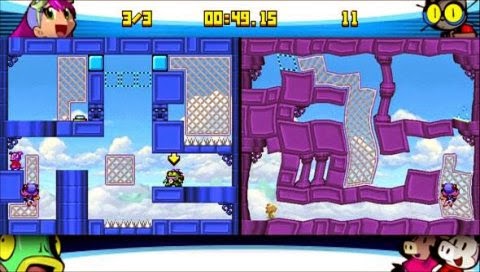